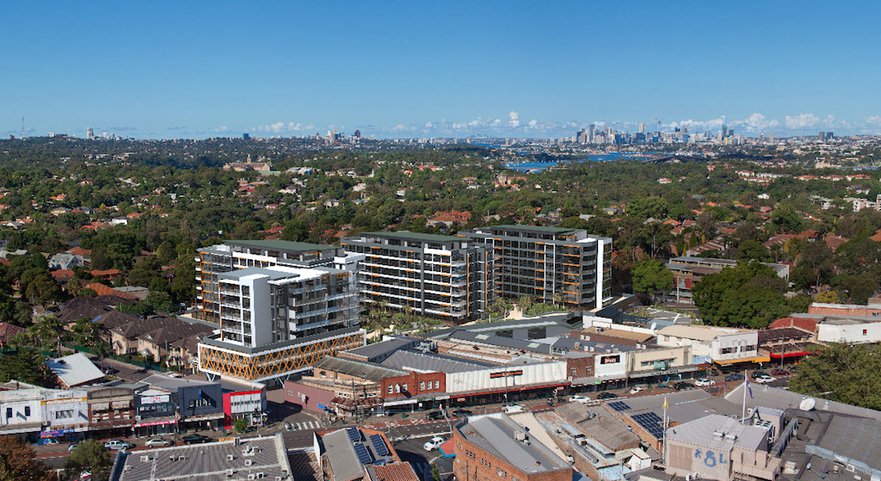 The picture above was supplied in 2013 when the application lodged DA 2013-1036 with Hunters Hill Council, after finalising the Deeds (like contracts) to be able to acquire the public land adjacent to it – at a time convenient to it.

The initial concept was for 4 * eight-storey towers above a two-storey podium, built across the current site of the shopping village, and consuming the acquired parcels of previously-public land being 1) the ‘at grade’ car park on Cowell St where street numbers 4-6 Cowell St would stand, 2) the timber cottage at 10 Cowell St, and 3) a parcel of land off Massey St. The redeveloped site will also cover the location where a small block of flats is currently standing at 8 Cowell St.

That Development Application received >290 responses, approximately 99% of which were negative. Because of Hunters Hill Council’s acknowledged conflict of interest, the firm Architectus was engaged to review and make a recommendation on the application, before it may proceed to the Joint Regional Planning Panel (which has now been replaced) for determination as they would have been the Consent Authority. Architectus recommended that the applicant withdraw the application, for a number of reasons generally related to compliance with various requirements. But it should be understood, that height and bulk were compliant with the Local Environmental Plan (LEP) of Hunters Hill Council. Neither height nor bulk were the reasons that withdrawal was recommended.

The applicant engaged a new team of architects, town planners, and other consultants – and has been pursuing a change to the planning controls applicable to the site ever since.