Justin Parry-Okeden and Russell Young from Gladesville Community Group attended and presented to Council at the Council Meeting on 23 June, about the upcoming review of the Development Control Plan (applicable to the GSV site). Whilst we’re delighted that Council are revisiting the controls, we expressed concern that the first step would be to adopt an “Image and Branding” strategy for Gladesville, effectively delaying the important improvements which are so clearly desired by the community.

In our view, the elimination of setbacks to Cowell and Flagstaff Streets when the second DCP of 2010 was adopted (very quickly after the ‘Newbold report’) was a critical change which supported the extremely poor DA for GSV (recently withdrawn), and is an example of having gone too far to support the developer’s interests, against which community amenity was not adequately balanced.

We thank Deputy Mayor Meredith Sheil and Councillor Justine McLaughlin for their recognition of the validity of these concerns and their attempts to ensure that a commitment was made for timely and meaningful progress, from the meeting on 23 June.

Parking meters are back on the agenda again. We attach articles scanned from 9 July’s TWT, including a letter to the editor from the President of the Gladesville Chamber of Commerce, Yvonne Dornan, and an article+picture against the meters. It is clear that parking meters are controversial, and the adequacy of parking was an issue identified by the Gladesville Community Group as being inadequately addressed in the DCP for the site.

We believe that it is clear; the redevelopment of GSV must create much more parking than is permitted under the current DCP. The number and size of developments in the Gladesville area will exacerbate the current shortage of parking, in which residential streets near Victoria Road are already saturated with all-day parking of staff working for retailers and other businesses in Gladesville.

We share the Gladesville Chamber of Commerce’s desire to see the revitalisation of the Gladesville Shopping Village, redeveloped into a vibrant and productive commercial centre. We believe, however, that the GSV redevelopment must be responsible, and it must handle the parking load which it will generate (note the attached picture from Top Ryde Shopping Centre, in which staff parking is accommodated).

Considering that the whole GSV site used to be a Council-owned car-park, and the residual 30 spaces in the open-air at-grade carpark are to be subsumed in the redevelopment, it must make an additional contribution to facilitate parking for visitors to the broader Gladesville area including Gladesville Public School, and the businesses on Victoria Road. If the DCP does not impose this restriction on the site, now, Gladesville will forever pay the price, felt by businesses, staff, local residents, and non-resident visitors alike.

Financial Sustainability – linking the budget, the parking meters, and the GSV development

The introduction of paid parking by non-residents was discussed in the attached report (pages18, 24, and 26) into the financial sustainability of Hunters Hill by the NSW Treasury Corporation.

The T-corp report made adjustments in order to calculate an Operating Result (excluding capital grants and contributions) which may be compared to peers, and focuses on operations under the control of Council management. Hunters Hill Council’s Operating Result (excluding capital grants and contributions) deteriorated from a deficit of $12,000 in 2009 to a deficit of $1,705,000 in 2012 (Section 3.3). Even more alarming, the outlook for the 10 years to 2022 showed consistent and deteriorating deficits (Section 4.1).

Section 6 of the T-corp report concludes “Based on our review of both the historic financial information and the 10 year financial forecast within Council’s long term financial plan we consider Council to be moderately sustainable in the medium term, however they are likely to face financial difficulty in the longer term.“

What does the municipality of Hunters Hill’s sustainability have to do with Gladesville? During the months following the lodgement of the application to redevelop the Gladesville Shopping ‘Village’, in which we learned how the DCP evolved and the Option derivative contracts were written to allow the developer to compel the Council to sell the open-air car-park and timber cottage at 10 Cowell Street, at the developer’s will, and the surprising lack of heritage protection afforded to the timber cottage at 10 Cowell Street, we wondered why the Council would have worked with such determination, for so many years, towards this outcome. One conclusion we have come to is that this may be seen a financial salvation.

We believe that a strong Council, one which can sustain its own operations, is a responsible Council. These assets earmarked for sale remain in public hands, now, because no Council administration in the past has ‘sold the silverware’ in order to bankroll financially unsustainable operations.

Assets sales should be strategic. They should serve the community. They should result in an enhancement, not reduction of community amenity. We will welcome a responsible redevelopment of GSV, even one which stands significantly higher than anything previously built in Gladesville, but it should be a good development. Council is in a better position to dictate the terms upon which public land will be sold into the development, and planning instruments amended to benefit a developer, when the sale is not required to ensure the Council’s long term financial sustainability.

If the Council cannot become sustainable, as measured by its Operating Result, we should expect the municipality to remain a target for amalgamation, and when this ultimately occurs the municipality will simply be scarred by inferior development and the loss of heritage along the way if projects like the GSV redevelopment continue without addressing the concerns raised by nearly 300 members of the public.

We recognise that metered parking may be one part of the solution, but the Chamber of Commerce’s concerns must be considered along with the broader issue of adequate parking for the Gladesville of the future, after all of the recent, current, and proposed development has been realised.

In any case, we believe that Hunters Hill Council should achieve a responsible and sustainable Operating Result (excluding capital grants and contributions) before any asset sales should be considered, and we hope that it will not sell any land into the redevelopment of GSV until the DCP review is complete, and the decade+ long parking-meter argument can be resolved within an integrated and comprehensive traffic and parking management plan for the whole of Gladesville, which is so badly needed at this time in which unprecedented development is being undertaken. 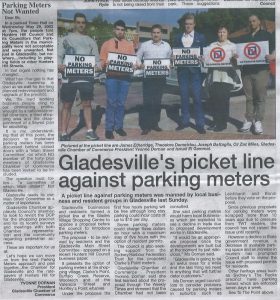 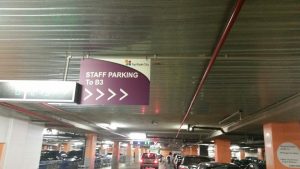