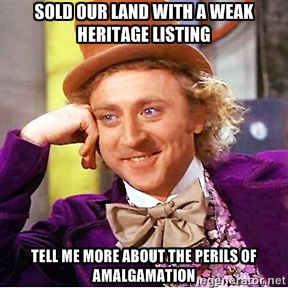 The Gladesville Shopping Village development is one step closer to becoming 16 storeys high as the developer’s application to change the planning controls proceeds through the state government’s process – after Hunters Hill Council sold them our land.

1 step closer to 16 storeys on the Coles site
As expected, the NSW government department of Planning and Environment has completed the pre-gateway review and recommended that the application proceed to the Joint Regional Planning Panel (JRPP) to determine the applicant’s Planning Proposal. The JRPP is the panel that recently approved the redevelopment of 230 Victoria Rd, adding nearly 100 new residential units to the corner of Victoria Rd and Jordan St.
For more information click on “Dep Sec Signed Assessment and Recommendation Report.pdf” on the page at the link below
http://pgrtracking.planning.nsw.gov.au/ViewPGR.aspx?Mode=V&pgr=153
So, what does the applicant want? What every developer wants. To build higher and build more densely across the site. Including on the land that was OUR community’s land until Hunters Hill Council sold it off earlier in 2016. Including building where the heritage listed timber cottage at 10 Cowell Street currently stands.
As much as the 16-storey maximum height IS a concern, the even GREATER problem is the increase in density, measured as FSR (floor space ratio, which expresses how much floor space can be created in the building, based on how big the block is). The applicant is seeking an increase in FSR to 3.4 across the whole site, from 1.3 – 2.5 which is the current range applicable to different parts of the site.

Remember the initial DA would have created 180 flats with the prevailing FSR. The new FSR sought would permit 250 flats to be built. 250 more flats in THAT site alone, in ADDITION to the developments on Wharf Rd, corner Victoria Rd and Jordan St, and numerous sites on Victoria Rd at varying stages of progress – with most sites permitting 5-6 storey development. 250 flats on the GSV site ALONE!

How will Gladesville cope? Who cares? Maybe if we were under 1 council they would take responsibility for town planning with an integrated approach across both sides of Victoria Rd.

Presumably Hunters Hill Council will push a line like ‘oh it’s not us, it’s the evil state government’.
* Remember it was Hunters Hill Council that SOLD our land to the developer.
* Remember it was Hunters Hill Council that sold 10 Cowell Street, the car-park at 4-6 Cowell Street, and a parcel of our land on Massey Street – WITHOUT PUBLIC CONSULTATION. It’s not like Hunters Hill Council can’t get a message to the public – you can hardly wipe a window with a scrunched up page from The Weekly Times without seeing some message from the Council in print.
* Remember it was Hunters Hill Council that sold 10 Cowell Street, the car-park at 4-6 Cowell Street, and a parcel of our land on Massey Street – WITHOUT TENDER!
(Although not illegal, recommendation 3.1 from the NSW Office of Local Government’s Guidelines for Local Government encourages tenders “where the sale or purchase of land may be considered controversial, contentious or political” https://www.olg.nsw.gov.au/sites/default/files/Tendering-Guidelines-for-NSW-Local-Government.pdf).
* Remember it was Hunters Hill Council that deferred the heritage listing of 10 Cowell St in 2012 and then executed deeds (like contracts) for its disposal BEFORE eventually finalising the heritage listing.
* Remember it was Hunters Hill Council that, when it eventually applied heritage protection, gave 10 Cowell Street the ONLY heritage listing EVER in Hunters Hill that “excludes curtilage” (making it easier for an applicant to get rid of the cottage instead of retaining it in-situ).
* Remember it was Hunters Hill Council that sold 10 Cowell Street to the developer WITHOUT any controls to prevent this predictable grab for height and FSR.
* Remember that when a former Mayor and a former Councillor (the co-convenors of the Save Hunters Hill Municipality Coalition) met with Hunters Hill Council they had the good sense to advise the Council that it should withdraw from those land-sales, BEFORE they were completed – but Hunters Hill Council refused.
* Remember that when Hunters Hill Council refused to withdraw from the sale, citing the cost exposure of doing so as the reason. BUT look at how much of OUR MONEY is being spent on pursuing legal action against the NSW Government’s amalgamation – which was EXPECTED (disclosed in the legal estimate approved by Council) to lose!
Amalgamation update
Speaking of amalgamation, we hope everyone enjoyed being consulted at recent meetings of Hunters Hill Council.
The most recent, on 10th October, was required because, according to statutory guidelines: “Should any future expenditure be outside of a council’s adopted budget and be of an amount equal to or greater than $250,000 or 1% of the council’s revenue from rates in the preceding financial year (whichever is the larger), then such a variation shall be advertised and public comments invited”. That approval was to fund an appeal, having already lost the initial case.
Apparently with our support, Council has spent >$250K of OUR money fighting and losing (as expected) in the Land and Environment Court. That is also BEFORE allowing for the cost award against us, as expected based on other rulings in favour of the state government and against protesting councils – so basically double that to $500K.
And we’re now happy to have more of our money spent on an appeal, APPARENTLY.
Hunters Hill Council is actually the smallest micro-council in NSW, so we could benefit tremendously from a sensible well-managed amalgamation, to give us the critical size required to function effectively in the modern era. Lane Cove Council is actually one of the best performers, with assets and infrastructure in excellent condition, services which are the envy of most, genuine public engagement, no debt, operating surpluses, and public access to Council that most Hunters Hill residents could only dream of – despite them being 2.5x our size.
The closest we had to consultation was when Hunters Hill Council developed a Claytons response to local government reform (Joint Regional Authority), whereby Ryde, Lane Cove, and Hunters Hill Councils would stay independent but meet to make decisions by unanimous agreement that would deliver aspirational cost savings. Kumbaya. During that consultation on “Fit For The Future”, less than 30% of respondents wanted Hunters Hill Council to stand alone, but Hunters Hill Council claim 70% – 80% support because they have assumed the support of the respondents who liked the sound of a “Superior Alternative”. After a brief sales pitch of the Joint Regional Authority during the ‘consultation’ meetings, people were asked if they liked the “Superior Alternative” and most said they liked the sound of it. That doesn’t mean we want our rates spent fighting a legal battle against the state government, especially when we’re expecting to lose – and there’s such an infrastructure works backlog to fund.
Actual performance does not support the claim that we need to keep local councils small: to stop developers from getting whatever they want, to retain our heritage, to protect our local character. Hunters Hill Council is dripping in hypocrisy with such claims.
Councillors Zac Miles and Gary Bird have consistently voted against continued expenditure of ratepayers’ funds when the matter has been before council recently.
Mayor Richard Quinn, Deputy Mayor Justine McLaughlin, and Councillors Mark Bennett, Peter Astridge, and Dr Meredith Sheil consistently vote to continue spending our money on such legal action.
Hunters Hill Council is the smallest micro council in NSW. If anyone could benefit from a sensible and well-managed amalgamation it was us, and Gladesville could have come under 1 planning authority. But instead, we’ve had continuing expenditure on legal fees and land sales without public consultation or tender, oh and a colourful ribbon campaign that would inspire …… anyone?

What do we need?

Elected representatives standing up for the community against bad development. Unlike the many scars of irresponsible development currently being inflicted on the Sydney landscape, with us next in line, Rozelle is an example where elected representatives have sent a strong message that they will put their communities ahead of developer profits. Can you see Hunters Hill Council fighting like this, let alone for Gladesville?

http://www.smh.com.au/nsw/land-and-environment-court-rejects-latest-plans-to-redevelop-the-former-balmain-leagues-club-site-20160928-grq30v.html
What can you do?
Share our emails and encourage your friends to join our mailing list by contacting us at mail@gladesvillecommunity.com. Our website is out of date, but we’re staying active through email.

And thank you to the subscribers who have sent messages of appreciation and support. It’s good to know that you find the updates useful.