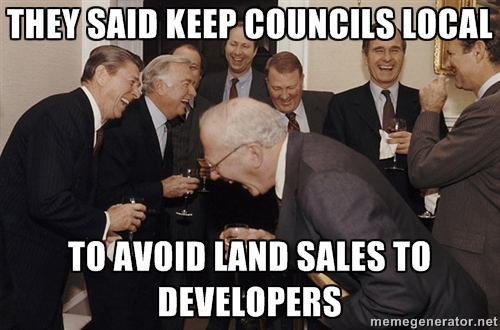 The fight against amalgamation is looking very expensive for rate-payers

* The satirical image above is for entertainment only*

The owner of the Gladesville Shopping Village is seeking state government approval: 1) to build to 16 storeys high, and 2) (EVEN MORE OF A PROBLEM) to increase the bulk of the development from a floor-space-ratio of 2.4-2.7:1 to a massive 3.4:1. This translates directly into more units, more people, more pressure on parking, roads, local schools, and other infrastructure. This comes as the tower cranes are already boosting residence numbers in Gladesville, and Victoria Rd is carrying increased traffic from developments in Ryde, Meadowbank, and suburbs farther west or north – with plenty more to come!

The application to increase the height and floor-space-ratio will now apply to the adjacent land that was publicly owned, until Hunters Hill Council recently sold it to the developer. The footprint of the development will now extend across the open-air car-park on the GSV side of Cowell St, and down to the the corner where the early 1900’s timber cottage currently stands – with the VERY FIRST heritage listing that Hunters Hill EVER created that ‘excludes curtilage’ (allowing it to be taken away, etc)!

Hunters Hill Council resolved not to support the developer’s application for extra height and floor-space-ratio. However, you can read the Council’s submission at the link below and decide for yourself whether the submission captures the spirit of the community’s attitude towards the gross over-development, and the smack in the face of having our own land sold (by our council) only to have have the buyer seek to bypass our own planning rules which were already exceedingly generous. Or is Council’s submission too kind to the application?
https://issuu.com/gladesvillecommunity/docs/council_covering_letter_190516

At its meeting on 14th June Hunters Hill Council, the motions in item 8.1 were carried, including self-congratulations on the selling the public land in Cowell and Massey Streets for $9.5m. Readers may form their own view about the value of 2,344 sqm adjacent to a development, ~25% of the combined development footprint, which is already approved for 10 storeys and for which the applicant seems to expect approval to build to 16 storeys. Recent sales in Cowell Street itself zoned for only 2 storey houses were in the order of $2.2m and $1.8m for 601 and 481 sqm respectively (with houses on them). Even the sale of 26 Cowell St (the long-vacant deceased estate with a house that had suffered from a lack of maintenance) was sold for approximately $1.4m. After allowing for the value of the houses, the land alone – in the zoning which only allows 2 storeys – is selling for approx$2,800 – $2,900 per square metre. Against those comparatives, we were surprised to see Council congratulating itself on the price of approximately $4,000/sqm achieved, considering the land in question can be built to FIVE times as many stories AND is of strategic significance to the adjacent development site. The state government thinks that micro councils might not be be the best way to serve local communities into the future, and when you see how they manage and dispose of public assets (without public consultation or tender!) maybe they have a point.

Woollahra Council lost its case against amalgamation in the Land and Environment Court last week. You can read more at http://www.smh.com.au/nsw/big-victory-for-baird-mergers-as-woollahra-council-loses-court-challenge-20160720-gq9h4k.html.

We will wait and see what Hunters Hill Council does about it’s case.

At the Council meeting on 26 April 2016 (Meeting 4400) Council resolved to commence legal action estimated to cost $150,000 or more, with less than a 50% chance of success (disclosed in the report), and the risk of having a cost award against Council for the state government’s costs (also disclosed in the report). Council later approved a 33% increase in the budget to $200,000 on 23 May 2016 (Meeting 4402), when it became evident that the initial estimate was inadequate.

At that time Botany Council had already lost its case and suffered a cost award in favour of the state government, and more recently the same has happened to Woollahra. We note that Clr Zac Miles spoke and voted against that Motion to continue expenditure, and Clr Gary Bird was absent but is on record not supporting this expenditure. The continued expenditure of ratepayers’ money fighting amalgamation and pursuing this case has been supported by Mayor Richard Quinn, Deputy Mayor Justine McLaughlin, Clr Meredith Sheil, Clr Peter Astridge, and Clr Mark Bennett.

To the end of June 2016, legal invoices for this individual case have totalled over $192,000 and the case is continuing. Costs may also be awarded when the outcome is known.

For those that missed it, Hunters Hill Council received a special mention in this Channel 9 news story on the amalgamations and the salaries of each General Manager ($220K for ours) represented in terms of ratepayers ‘looked after’ http://www.9news.com.au/national/2016/05/23/20/49/councils-fight-nsw-amalgamations.

Councils and the responses to the state government’s amalgamation drive

The results of Gladesville Community Group’s surveys 1) of public satisfaction with Councils’ performance, and 2) of Councils’ handling of the Fit For The Future initiative are available at the links below. Respondents identified Lane Cove and Hunters Hill as a desirable combination, but it was never publicly investigated.
http://gladesvillecommunity.com/survey%20results.html
http://gladesvillecommunity.com/fftf%20consultation%20survey%20results.html

We remain disappointed that the leaders of Lane Cove, Ryde, and Hunters Hill Councils never saw fit to respond to the state government with a smaller amalgamation along the lines of Lane Cove and Hunters Hill Council areas, instead taking the high-risk strategy of expecting the state government to fall for a ‘Claytons amalgamation’ (the amalgamation you have when you don’t have an amalgamation) – where councils remain independent but will apparently meet up and unanimously agree to do things together (the Joint Regional Authority).

In the Northern District Times (NDT) on 29th June, Ryde Councillor Craig Chung wrote of the Council expenditure fighting amalgamations, and the shortcomings of the [state] government’s process, but also of the importance of “looking towards the future where we have integrated services across broader areas, where neighbours across the road from each other have the same planning rules, and where the savings made by cutting senior and middle management are returned to the community by way of better services”.

In the NDT on 6th July Hunters Hill Councillor Peter Astridge’s letter disagreeing with Councillor’s Chung’s sentiments finished with “They are certainly Fit for the Future as the Baird Government doesn’t dare admit.”

We can only ask: why are they spending so much of our money fighting a court case we’re expecting to lose, only to defer the inevitable amalgamation (the court cases challenge the process, not the state government’s authority to do so) – when there are actual benefits to be enjoyed if we managed the amalgamation response properly – and our finances, our assets, and our services really are nothing to celebrate???